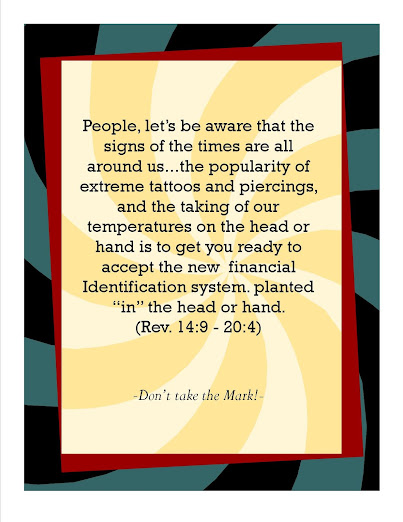 ....This is not to say the system "knows" it's preparing for the mark-of-the-beast, but the spirit of the under-world knows the time left is short and it must work fast to relentlessly, pursue an impervious quest to become "like" The Most High. The world's greatest enemy is not man but the spirit in some that don't know this spirit guides/controls them.  Notice Revelation chapter 14 says "IN" the head or hand, which was not possible when it was written, but it IS possible today. (micro-chips?)  Lawmakers discuss mandatory vaccinations.  We must be wise as serpents, redeeming the time that it not come upon us unawares. There are various beliefs about the church being here for this and my next post proves Jesus wasn't warning the disciples of these signs for nothing and Paul warns us also as I'll show in the next post in-depth verse by verse.

at February 28, 2021 No comments:
Email ThisBlogThis!Share to TwitterShare to FacebookShare to Pinterest
Topics of Discussion The Mark is soon to come

The Natural Use of the Man or Woman

....according to the Biblical perspective...
Satan is bringing every unnatural gratification to couples that he can concoct....BUT it Is Written in Romans chapter 1 that "a man ought NOT leave the Natural Use of the Woman and likewise the Woman not Leave the Natural use of the Man".  The Natural use can cause reproduction in Human Beings. (not "will cause" but CAN ) I petitioned God in 1982 when a babe-in-Christ was seeking a way to not "fornicate" and asked if "it's okay to perform Oral Sex on her boyfriend instead"  I was totally unfamiliar with the act except that it seems unclean, so I said "let me go before the Lord with that", (He answers my spiritual requests really fast) the next day I called her and said the Lord spoke very clearly saying "tell her, Any Sex Act that Cannot Produce Legitimate Offspring in Human Beings, it is Not of God'; and He repeated it twice.  This is what I tell all who ask on this matter to this day and it includes every deviate, unlawful, criminal, and sensual sex act known to man.

The bed IS undefiled yes with lawfully Married couples (not all married couples are legally bound to each other in God's eyes) it does not mean you are at liberty to perform deviate unclean sex acts, consensual orgies, threesomes, swapping, using jackets, chains, whips, buckles, toys, gels, creams, costumes, wigs, photos, mirrors and videos and such like in your bedroom or anywhere, such things are unnatural and unnecessary and not required for human reproduction.  When a couple feels they must deviate from the natural it is satan dissatisfying their thoughts of the act, so they will explore his damnable suggestions and he can inflame their souls with an unholy fire of lust for the unnatural.  The mouth is to speak and only take food and drink or emit the same when ridding itself of toxins or foreign bodies. PERIOD.  Food does not come out of the genitals so NO MOUTH BELONGS THERE, EVER !!!   Nature itself teaches us it is obviously wrong, yea even an abomination!     IT WOULDN'T BE NATURAL OR NORMAL !  Don't use Solomon as an example, before he gave his life to God he had hundreds of wives and multiple hundreds of concubines and was sexually active with ALL OF THEM.  Normal couples who love God are easily and immensely satisfied with their lawful spouse with natural intercourse alone. Many say it's not in the new testament but the scriptures below tell us otherwise as a warning. We cannot redefine sin, simply because we choose another way.

Leviticus 18:22 | View whole chapter | See verse in context
Thou shalt not lie with mankind, as with womankind: it is abomination.

Leviticus 20:13
If a man also lie with mankind, as he lieth with a woman, both of them have committed an abomination: they shall surely be put to death; their blood shall be upon them.
24
2424ROMANS  1:24-274

Wherefore God also gave them up to uncleanness through the lusts of their own hearts, to dishonour their own bodies between themselves:

25Who changed the truth of God into a lie, and worshipped and served the creature more than the Creator, who is blessed for ever. Amen.

26For this cause God gave them up unto vile affections: for even their women did change the natural use into that which is against nature:

27And likewise also the men, leaving the natural use of the woman, burned in their lust one toward another; men with men working that which is unseemly, and receiving in themselves that recompense of their error which was meet.

2nd PETER 2:6
And turning the cities of Sodom and Gomorrah into ashes condemned them with an overthrow, making them an ensample unto those that after should live ungodly; And delivered just Lot, vexed with the filthy conversation of the wicked:

7“Even as Sodom and Gomorrha, and the cities about them in

like manner, giving themselves over to fornication, and going

after strange flesh, are set forth for an example, suffering the

at February 06, 2021 No comments:
Email ThisBlogThis!Share to TwitterShare to FacebookShare to Pinterest
Topics of Discussion Sensual Sin

Do We REALLY know how to FORGIVE and be FORGIVEN?

Have You ever been wronged, lied on, cheated, or anything where the wrongdoer never asked forgiveness for what they did or say to you?  Did you go to them in Love just to straighten things out or to attempt or did you just throw them under bus and into the sewer, with backbiting, gossip, hateful words and avoidance?  We must remember the principle of being forgiven, since we are not immune from anger and hasty actions and speech.  Jesus gave us the principle in His teaching on how we should pray in the Lord's Prayer: He says "If we forgive others what they have done to us, God will forgive the wrong we have done." Matthew 6:15

If we hold the trespasses others have against us, God will hold our trespasses against Him & others. We have to let things go, accept apology, attempt to settle the matter peaceably.  There may come a time when we too are tempted to react or enact unseemly in ways we would say as did Peter who thought he'd Never deny Christ. We MUST treat others when they transgress, the way we would hope to find mercy and grace if it were us. Galatians 6:1

Today's generation has the impression that we can just go to God and ask Him forgiveness for what we've done or said to someone, and too often people will ask God even before they commit a transgression or sin as if God is obligated to overlook it as long as we confess to Him. NOT !  Job in the Bible had 3 accusing friends who kicked him while he was down, with their tongues, and when they sought God He ordered them to make a sacrifice for sinning against Job, and then when Job prays for them, God would receive their sacrifice. Job 42:7

Job's friends had falsely accused him and had to confess to him and God, for God to receive them.  We tend to forget the scripture that says, " How can we say we Love God whom we've never seen and hate our brother/neighbor whom we see everyday?  It is a lie.
1 John 3:17  1 John 4:20

It is said by many "Jesus still loves"  of people who sin willfully, daily and mistreat others, but are they saved? Jesus loves everyone He died for, even murderers, but unless they are sincerely sorry for what they've done, and  confess and denounce it/repent and ask God's forgiveness, they are lost and Love not God.   It's not about Him Loving us, that is proven daily, it's "Do We Really Love Him?"  Loving God means keeping our lines of communication open with Him by doing the things that Please Him and not just ourselves.

It's one thing to be Loved by God and another thing to be Chosen by Him. People settle for just Christ's death, but have no respect for the purpose, the cause or the resurrection.  Forgiveness is not to be taken lightly.  Let's not trample under foot the Blood of Christ nor cling to the things that nailed Him to the Cross, but let every one that nameth the name of Christ, Depart from Iniquity!   2nd Timothy 2:19

Iniquity is sin, unforgiveness puts your relationship with Christ in certain jeopardy, it means that what you ask God to forgive is Not forgiven unless you release others and forgive them. Don't Risk It !   Love breaks no commandments.

at February 03, 2021 No comments:
Email ThisBlogThis!Share to TwitterShare to FacebookShare to Pinterest
Topics of Discussion Are you REALLY Forgiven?
Newer Posts Older Posts Home
Subscribe to: Posts (Atom)

A 41-year Bible student, since the tender age of 21. A prophetess of God, not by desire but by assignment and evidence of gifts of the Holy Spirit. Primary gifts being Knowledge, Word of Wisdom and to know Mysteries, Discernment and Prophecy. I have been a very misunderstood person, very falsely accused to date, things I don't even believe in nor stand for have I been never proven of but branded guilty without witnesses, without questions, framed, judged at face-value but these things have made me realize just how much The Lord is playing a significant role in my Life, my strength, my peace and my joy, I can only proclaim that I never would've made it without The Lord's hand on my Life, and His Peace imparted unto me. Long as I Got King Jesus....!!!!